A day at the forge

Thanks to my relatives I had the chance to spend the day as a blacksmith.

Up at Standalone Farm next to Letchworth Garden City, Jo Fry runs a one day blacksmith course. After a chat and a safety brief we got started on a test piece, a toasting fork. This is an ideal piece for beginners like myself, the metal is not too thick that it is hard to work but not too thin that it easily burns or cools to quickly. The old saying “strike whilst the iron is hot” is very true but Jo added an equally useful one which was before you take your iron out of the fire work out what you are going to be doing with it. I found that a practice before heating the metal worked very well.

The first skill to learn was drawing down to make a tapered end to the bar, this was followed by forming the loop and wrapping the end in a spiral. 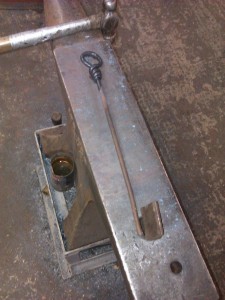 The next couple of operations formed the twists, a good tip here was selective cooling to control which parts were twisted. Finally, the prongs were formed by splitting then drawing down the two ends. As this was finished before lunch, I moved onto a little piece of jewellery. A variation of a tribalistic piece that I’d seen on another blacksmith’s website. As well as some practice in drawing down, this provided a new challenge in the form of a scroll which took a couple of attempts to get right. Once the scroll was cut from the bar it had to been handled in the tongs which added to the difficulty.

After lunch, I made a coping saw by heating and bending a bar, some of the bending was done in the bending forks and some on the bick (or horn) of the anvil. I added a scroll just for practice. In amongst the tools was a rams head on a bar. When Jo asked what I’d like to do next I said I quite fancied the ram but was not sure if I’d be upto the job. Jo perswaded me to take on this challenge and after a lot of hammering I finally chiseled my way through the bar to and then thinned them out to form the horns. To simplify the bending Jo used the oxy-acetylene torch to locally heat the metal so that it only bent where we wanted it to. Then after some more time in the forge and more hammering to flatten out the bar a face was formed and more details were added on with punch and chisel. A cutoff saw was used to cut the bar to size as time was getting on, my arms were getting weak and the metal was 16mm thick. The process for forming the horns was repeated on the opposite end to form a bottle opener, Jo got out the angle grinder to ensure that the flipping part of the bottle opener was sharp enough to get under the bottle caps. Finally the horns were twisted into shape. Jo polished everything up and we had time for a cuppa before leaving time. 2 thoughts on “A day at the forge”