My old Antex soldering iron is about 25 years old and although it provides a good service it is a bit beaten up. The cable is held together with self amalgamating tape and the element is looking a bit corroded.

When looking for a replacement soldering iron my key feature was it had to have a temperature control which I thought would be useful for hand soldering surface mount components. I was also sensitive to price and price of alternative tips. It’s good to have at least a tip suitable for general work, de-soldering and fine work. I less concerned over the power as for large work I typically use a gas torch and I don’t have the demands on an iron that would occur with continual use.
The Tenma Digital Soldering station seemed to meet all these criteria and I did not find and examples of issues with them, although since purchasing one person mentioned problems but I’ve not found out what those were. 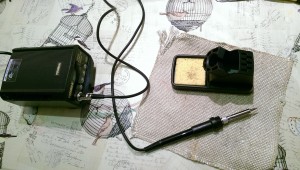 The station is easy to set up although I found the iron a bit floppy in the stand which worried me that it might fall out. The display is clear and easy to read. 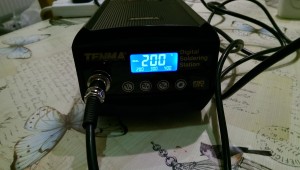 The control unit has 3 buttons which allows you to pick a temperature for the iron. These default to 200, 300 and 400 but can be configured as required. I expect I’ll fine tune these when I get some low temperature solder or have a de-soldering task.
I picked 300°C for my flux cored solder and was amazed at the speed it got up to temperature.

I expect this will change my work flow in that I’d normally plug in the iron before setting up everything else to give it time to heat up. Now I can turn the iron on at the last minute and it will be ready on seconds. In use the iron was comfortable and the tip was easily manoeuvred to allow me to solder the headers for an Arduino ProtoShield. The wire was a lot more flexible that I’ve been used to so it was nice not to have to wrestle with that.

The iron also cooled down quite quickly which is good for when packing it away. That’s where there is the main difference between this iron and my old one. Because of the control box it’s about 10 times the size and weight. 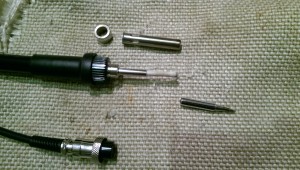 I’ll keep you posted on the long term use and if any issues develop. I’ll also see if the stand proves problematic or needs modification.