Back in the summer of 2014 I completed a gate modification extending the height of the back garden gate. One component of that was some bamboo screening at the top. Unfortunately as various cats, foxes and squirrels had used this as a climbing frame over the year it was in a sorry state and hanging from the gate like a spiders web. I chopped up some pressure treated planks and screwed them on as a replacement. 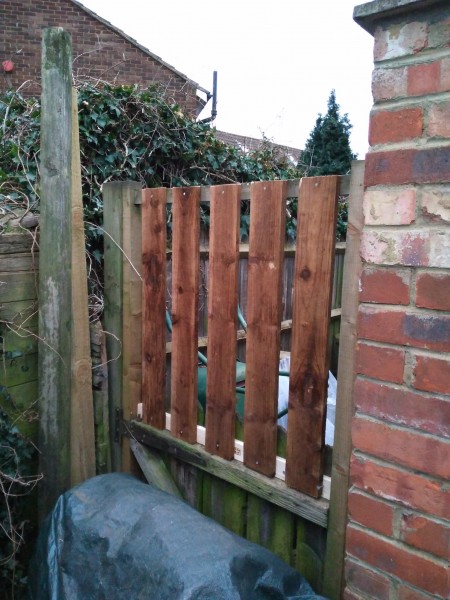 I concluded that the offcuts from that would work well as a birdtable that I had promised to make for my mother in law earlier in the year.

There were no plans for the table, I just worked it out as I went along. Firstly 3 planks were screwed together with a couple of battens underneath. Another 2 planks were cut to form the triangular supports for the roof. I drilled through these in the positions where the uprights would be located. A curtain pole was cut into 4 equal lengths and drilled with a pilot hole for the screws. Long thin screws were then used to screw the uprights onto the triangles and then the uprights onto the base. A tongue and groove board was used for the roof. I’ve no idea where that came from but from the colour it looked like mahogany. These were nailed onto the triangles. I cut some little battens to stop the bird food falling off and pained those with fence preservative to match the table. These were nailed to the table. 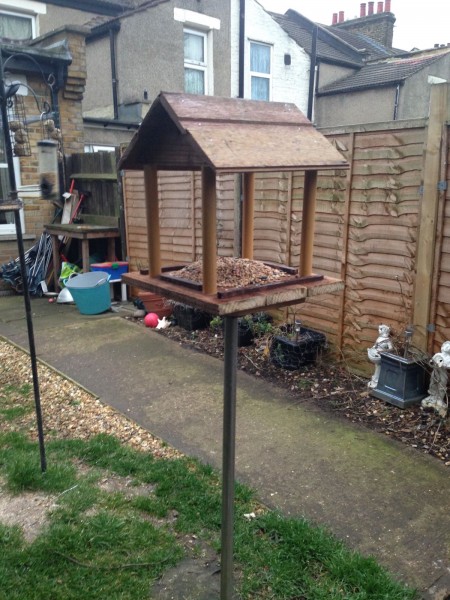 Finally a length of pole was cut to length to support the table. I believe the bracket came from a TV aerial and that was screwed to the bottom of the table. Installation was simply a case of banging the pole into the ground and tightening up the bracket.