Every year I meet up with my old friends from the Student Television of Imperial College. On previous years I’ve taken along my Flea Chariot and some magic washers. This year the theme was “Something made this year” so I took along some of the 3D printing experiments I’ve done with the Robox 3D Printer.

I also decided to make a medal to present to the person who was selected to have the best “something” for 2015. My first step was to find a picture of one of the old logos and see if I could reproduce it in CAD before trying to print it.

As previously mentioned I modelled the medal using OpenSCAD, I then exported it as an STL file. This was then loaded up in the AutoMaker software that comes with the Robox printer. The 3D printing process went well and I left it to cool before removing it from the bed. My only slight disappointment was that the top of the letters was not properly filled. It will be interesting to see if this problem still occurs with the latest version of the AutoMaker software.

The holes in the top of the print were filled with household “fine” filler and sanded smooth. I then used a plastic primer paint to ensure that my top coat would correctly bond. When I came to look for a top coat I thought I’d just be able to pop into a toy or model shop and buy some enamel paints. There was nowhere near my house or work that had any paint. On an off-chance I popped into Claire’s Accessories to see if they had any nail varnishes in appropriate colours. I was lucky that they had a “neon” yellow and blue that were just what I was looking for. I carefully brushed on several thin coats of the background colour and then repeated with the yellow highlights for the border and lettering.

The dinner was a big success and the best “something” was an arcade machine built using some old wardrobe doors and a PC motherboard running the Mame emulator. 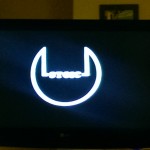 Student Television of Imperial College Logo as seen on the BBC 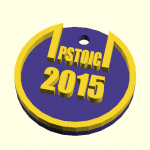 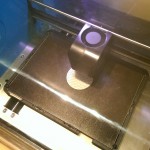 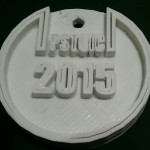 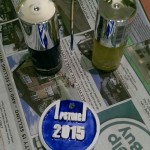 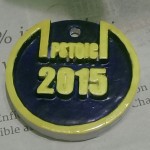 More pictures from the dinner.