For 2016 I had three main goals. Firstly to keep on top of projects and try to finish more than I started. Second to progress the Stirling Engine build and finally to visit the Model Engineer show at Brooklands.

I reviewed 2016 projects last month and I’ve mostly managed to progress them or complete them. It’s just something I need to keep on top of and either complete or abandon projects to ensure my stack of boxes does not keep growing. One project which dominated the year was the Dragon Detector, initially created as a joke this build got me working with computer vision, IOT APIs and produced an excellent model knight. The Stirling Engine was progressed and the flywheel was cast in the spring. I’ve also been squirelling away components for this and reviewing the design. There’s quite a few parts to make still but I’m confident that it can advance a bit further in 2017.

As planned, I made it over to Brooklands for the 2016 Model Engineer Exhibition it was a good exhibition but perhaps not as good as some of the prior ones. It is a good venue and I hope it continues and improves at its new home. 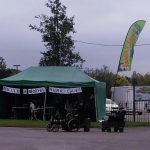 2016 was a year of public speaking and workshops. In the spring I told the London Arduino group about the Enchanted Cottage and Design Contest, I also attended a workshop to add enchantment to everyday things with Raspberry Pi, later in the year there were two talks about the Dragon Detector project, one to the London Linuxing group and the other online to the 96Boards Community. In the middle of the year I started a mini series featuring some great European Engineers. I only managed to complete two but that’s something I hope to continue in 2017.

Please let me know if there is anyone you think should be featured.

There have been some great interviews in 2016, in January, Chris Edwards told us about his wood turning. Mark Milner explained his Simply Stairs book in June and I’m sure that helped me find the courage to complete the pig’s ear handle later in the year. Later in the summer Agustin Flowalistik talked about 3D printing, low polygon models of Pokémon and making a business from 3D models. Frederick Vandenbosch who I know from the Element14 forums was interviewed his prize winning designs using the Raspberry Pi.

Equally great were my two guest writers this year, Mark Beresford wrote a piece about what is a shed and Catherine Jones wrote about her experience at the Heath Robinson Museum that opened in October, many thanks for those excellent articles. Thanks also to Alan for fitting a skylight to a shed back in the spring. Early in the year I won with Proto-Pic and that allowed me to buy a kit to convert an ATX PSU to a bench power supply.

As mentioned about the Dragon Detector project was originally intended as a joke but when I was actually sent a board to build with I rose the challenge to create my dragon detecting automata. It did not gain me a big prize but there was a mention by the judges and then an interview and the Qualcomm Developer of the month award. Due to the success of the Dragon Detector, Arrow have send me another board to build a project with, you should hear about that later in January.

Part way through the year I had an idea for an e-book about saws, it’s progressing well and I hope to release something in the spring. Sign up to be notified of when it’s available and I’ll also be looking for reviewers.

I’d like to thank the people who have sponsored or supported the site over the year. MRO Supply, Activent, Screwfix, Garden Buildings Direct, Drills and Drivers, Tulsa Welding School, Chicago Brand UK, Colourfence, Traditional Oak & Timber, Qwikfast, Westerman International, Arrow, Element14 and Cayenne. Contributions allow the site to keep going and pay for hosting and domain name fees as well as materials and consumables for the Workshopshed.

A big thanks to 2020 Media for another year of WordPress hosting, domains, support and expert advice.

I think it’s been a great year for the Workshopshed both the projects that were achieved and content written for the blog. My goals for next year are quite similar to 2016, progress the Stirling Engine and keep on top of projects. After a couple of years where one project has dominated I’ll try and avoid that for 2017.